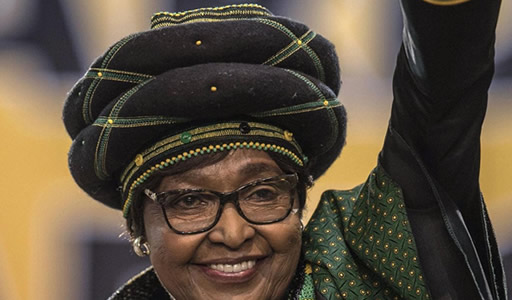 Winne Madikizela-Mandela popularly referred to as ‘Mother of the nation’ by many black South-Africans was a South African anti-apartheid activist, social worker and politician. She was also a daughter to Columbus and Gertrude Madikizela, sister to her eight other siblings, the second wife of Nelson Mandela and the mother to the two children they had together.

As a qualified social worker who was married an anti-apartheid activist in Johannesburg in 1958, after her husband was imprisoned following the Rivonia Trial, she became his public face during the 27 years he spent in jail. A period which she also rose to prominence with the domestic anti-apartheid movement. However, on various occasions, she was detained by apartheid state security services, imprisoned, kept under surveillance, tortured, banished to the remote town of Brandfort, subjected to banning orders and spent several months in solitary confinement. Her longest jailing was for 491 days, beginning on 12 may 1969, at Pretoria Central Prison, where she spent months in solitary confinement, where she was also tortured and beaten. According to her, this experience in prison “hardened” her.

She was banished to the town of Brandfort in the Orange Free State and confined to the area from 1977 to 1985. It was this period that Winnie Mandela became well known in the Western World as she won the Robert F. Kennedy Human Rights Award along with fellow activists Allan Boesak and Beyers Naude for their human rights work in South Africa. She also received a Candace Award for Distinguished Service from the National Coalition of 100 Black Women in 1988. She organized a creche with an NGO, Operation Hunger and a clinic in Brandfort with Dr Abu Baker Asvat, her personal physician, she campaigned actively for equal rights and was promoted by the ANC as a symbol of their struggle against apartheid. But while in exile in Brandfort, she and those who attempted to assist her were harassed by the apartheid police.

After her husband was released from prison in 1990, Winnie Mandela initially shared a great deal in his political activities, trips abroad. But in may 1991, she was sentenced to six years imprisonment upon her conviction for kidnapping, however, the sentence was later reduced to a fine. Then in 1993, she made a political comeback, with her election to the presidency of the African National Congress Women’s League and in 1994, she was elected to parliament and appointed deputy minister of arts, science, culture and technology in South Africa’s first multiracial government, which her husband held. Winnie Mandela continued to provoke controversy with her attacks on the government and her strident appeals to radical young Black followers and in 1995, Nelson Mandela expelled her from his cabinet (they had separated in 1992 and got divorced in 1996).

Regardless, Winnie was re-elected to parliament in 1999, but later resigned in 2003 after she was convicted on charges of theft and fraud, from involvement with illegally obtained bank loans. But because her actions benefited economically disadvantaged individuals, she was partially vindicated a year later when the conviction for theft was overturned as she had no personal gains from her actions.

She was recognized by the South African government, with the award of the Silver Order of Luthuli, for her contributions to the liberation struggle during the apartheid era in 2016 and was also recognized for her fight against apartheid in South Africa by the University Council and University Senate of Makerere University, Kampala, Uganda who approved the award of an honorary Doctor of Laws (LLD) degree in January 2018. Winnie Mandela later died on April 2, 2018, at the age of 81 after a long illness. A state funeral was held on April 14, at Orlando Stadium in Soweto, South Africa and to honor her legacy and life, numerous memorial services were held throughout the country.

Chic on a budget