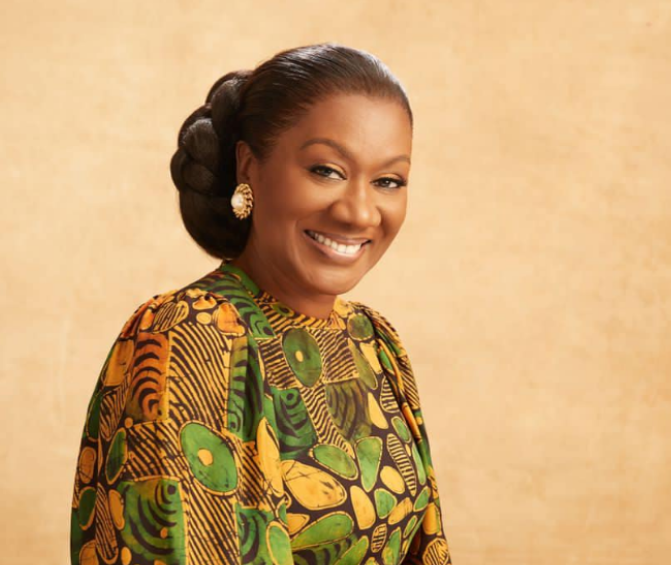 After more than two decades in the banking sector at home and in West Africa, Opunimi Akinkugbe embraced her entrepreneurial spirit when she established a games company in 2012. Bestman Games is named after her late father who was so called in his younger days. The company is the distributor of customised editions of Monopoly, Hasbro’s world famous board game. In 2020 her career took a leap into public service when she was appointed Nigeria’s ambassador to Greece.

After a few hiccups regarding her nomination, Akinkugbe formally resumed her new role in June 2021 when she submitted her Letters of Credence to the president of the Hellenic Republic Katerina Sakellaropoulou. That occasion was memorable for women as she became Nigeria’s first female ambassador to that part of the Balkans and the hosting president is Greece’s first female Head of State. And just a few months into her tenure the bilateral relationship between the two countries deepened when the host country’s foreign minister came to Nigeria.

The historic visit was the first time ever the Minister of Foreign Affair of the Hellenic Republic would visit the world’s most populous black nation. The journey from the boardroom to public service would not have come as a surprise to this former banker who believes life experiences come together to prepare one for the next step or what the person should be engaged in.

Her nomination as the representative of her husband’s state raised a dust of uncertainty. There were opposing voices who queried her candidacy being an indigene of another state. This brought to the front burner the status of ‘’statelessness ‘’ women married to men from other parts of Nigeria face in their own country. Like other storms which she’d waddled through in the corporate world the opposition was quickly quelled down as her choice was backed by several Ondo indigenes. On June 2021, Her Excellency resumed her new role in the cradle of western civilization and started out in earnest making the embassy more visible and accessible. With an active social media presence, there is more interaction and connection between the embassy and public on its Instagram and Facebook accounts.

It was inspiring and refreshing to see a post where she was clearing out snow from the embassy premises with other staff after a rare and heavy snowstorm hit the ancient city of Athens. As pictures speak a thousand words, the post spoke volumes of her commitment to always get the work done. It buttressed her capability setting an example that no task was too lowly to do for your country.

As a child of parents who were seasoned educators, Opunimi Akinkugbe was exposed to quality education and good values which shaped her life. From her mother she learnt the home must be welcoming, with a garden of beautiful plants which will uplift you even in gloomy situations. During her childhood, Nimi as she is fondly called by family and friends, developed the habit of reading regularly and learnt to appreciate music – a skill she fine tuned by getting certified studying the piano. Born the year Nigeria gained independence, she got her first taste in being a global citizen at seven, when her family relocated from Lagos to Dar-es-Salaam.

This move was necessitated by her late father, Feniobu Iroloye Ajumugobia’s role as the UNESCO Chief of Mission in East Africa. She received her primary and secondary education in Tanzania and Kenya. Later on, a teenaged Akinkugbe returned to Nigeria for her O’ Levels and proceeded to the prestigious London School of Economics for her first degree. Armed with a bachelor’s in Economics and International Relations, Akinkugbe started a banking career which lasted more than two decades.

She rose through the ranks in Stanbic Bank to the position of the GM, Head Private Client Services when she resigned after twenty years. Still in need for the more banking experience Her Excellency took up an appointment with Barclays bank as the West African regional manager. After some two years Akinkugbe could no longer postpone the urge to take a plunge into the entrepreneurial pool when she founded Bestman Games Ltd.  One could say her mother who founded The Play Pen, a child development centre in 1981, passed down the entrepreneurial bug. After overseeing the operations of the games company for eight years, Akinkugbe became a non-career diplomat. A published writer, she’s the author of an easy to understand wealth management book titled A to Z of Personal Finance. Her newspaper column Money Matters with Nimi gives advice and tips on building and improving wealth creation. The section is syndicated in several national dailies and magazines like the Punch, Thisday, Forbes Africa and Genevieve magazine.  She’s empowered people by making regular contribution to radio and television shows on the financial education. In 2011, the former banker became a guest writer for Lagosmums, a parenting blog writing on personal finance. She is a resource person for financial literacy and inclusion, and partakes in speaking engagements where she teaches personal finance and wealth management, including entrepreneurship especially to youths and women. One of the money lessons she learnt from her mother is  women should earn from home and this she practiced by giving piano lessons on the side.

A firmer believer in family life, Her Excellency recalled the time in her childhood when the family would sit and chat during lunch. Such times are great occasion parents and children learn and bond. She encourages fathers particularly to purposely create time for family.

Akinkugbe believes that parents should focus on building a solid family life as this creates strong relationships where children build confidence and trust.  Since Monopoly is from ages 6 to 100, her board games encourages family to spend time together free from devices playing and learning at the same time, doing fun things. With over thirty years in happy matrimony, she urges that family should be financially secured and operate an emergency fund that would come in handy in challenging times.

Her Excellency is grateful for her family; her supportive siblings for their wealth of experience and knowledge, her amazing husband for his unshakeable belief in her and her parents-in-law for their wisdom and guidance. She acknowledges the joys her children give her as well as her friends who are like siblings. These are her cheerleaders who got her back no matter what.

Sphere Woman of The Month

We all love DrBimpe's inspiring story at Women’s Sphere. Sit back and get motivated. I was born in Montreal, to...

At Women Sphere Magazine we celebrate successful women. In building a strong platform for women empowerment, we have conversations with...

Kamala Harris made history by being the First Female Vice President-Elect of the United States. She will serve as the...