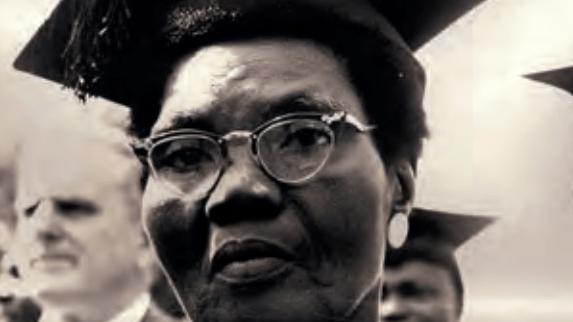 A chief, Nigerian educator, political campaigner, African Socialist, suffragist, women’s rights activist/ feminist, daughter, wife and mother are all the amazing things Funmilayo Ransome-Kuti passionately was. For being a part of grassroot changes, fearlessly taking the lead and for doing so unapologetically, some referred to her as “Beere” meaning beginning. For fighting for women’s right, demanding better for the representation of women, demanding an end to unfair taxes on market women, for leading marches and protests of up to 10 000 women, she was called the “Lioness of Lisabi”.

Funmilayo attended the Abeokuta grammar school and later went abroad, where she attended a finishing school for girls in Cheshire, England and acquired skills in dressmaking, elocution, French, music and other various domestic skills. Afterwards, she returned to her home country. Being amongst the first female students to attend the Abeokuta Grammar School in her early years, she later started arranging literacy classes for lower-income women. She also worked as a teacher and organized some of the first preschool classes in the country.

In 1932, she helped establish the Abeokuta Ladies Club which focused on adult education classes, sewing, catering and charity work. Although, its early members were majorly Western-educated women from the middle class and Christian women, Funmilayo later started organizing workshops for market women through the club, which gave her better understanding of the political and social inequalities faced by many Nigerian women. She also noted in one of her writings that “the true position of Nigerian women had to be judged from the women who carries babies on their backs and farmed from sunset to sunset… not women who used tea, sugar and flour for breakfast”. By 1946, the club became formally renamed Abeokuta Women’s Union (AMU) which is now accessible to every woman in Abeokuta. The union was formed along with Grace Eniola Soyinka (Mother of Nobel Laureate, Wole Soyinka) and gradually grew to represent 20 000 official members and 100 000 additional supporters. With Funmilayo Ransome-Kuti as president, the club focused its fight on unfair price controls and taxes imposed on market women. Her relentlessness, fierceness and that of the members of the union, who refused to be oppressed and shut down regardless of what and who they faced finally paid off, as the demands and complaints were later met.

Her drive to reach not just Abeokuta women, but every Nigerian woman led her to propose the creation of the Nigerian Women’s Union (NWU) in May 1949. With the support of the Abeokuta Women’s Union who subsequently became the Abeokuta branch of NWU, she was able to travel widely across the nation, to set up NWU branches. Being a founding member of the NCNC party, although, she ran as NCNC candidate for regional assembly but was unsuccessful, she acted as treasurer for the NCNC Western Working Committee and later President of the NCNC Women’s Organization in the Western Region.

She later organized a conference in Abeokuta to discuss women’s suffrage and political representation in 1953 which 400 women delegates attended. Afterwards, these participants formed the Federation of Nigerian Women’s Societies (FNWS) and campaigned for improved educational opportunities, creation of new social services and healthcare and for women’s political inclusion. Funmilayo was granted chieftaincy title of Oloye of the Yoruba people, which made her one of the very few women to have a position in any Nigerian House of Chiefs, and also served as a board member of the Nigerian Union of Teachers. She was also appointed to the Western House of Chiefs, and was the first woman to be appointed.

Over the years, alongside her political work, she invested time and money to establish new schools throughout Abeokuta. She travelled widely to England, Switzerland, Austria, the Soviet Union, China, Poland, Czechoslovakia and developed strong ties with Ghanaian, Egyptian and Algerian women’s organizations.

Funmilayo Ransome-Kuti received the national honor of membership in the Order of the Niger for her work in 1965, the university of Ibadan bestowed an honorary doctorate of laws upon her in 1968 and she also received the Lenin Peace Prize in 1970. Sadly, she later died aged 77, on family property after receiving injuries from a military raid.

She was and is a notable inspiration to lots of prominent figures namely; Margaret Ekpo, Hajiya Gambo, Amina Mama, Kwame Nkrumah who expressed and named her as a strong influence on their work. In 2012, the Nigerian government proposed the inclusion of her image on the new N5000 currency note and she also was postmortem honored with a Google Doodle on October 25, 2019