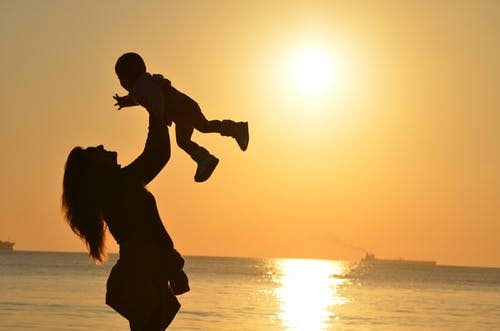 by Uju Ukpeh
in La Femme

So many people believe that Mothers’ Day should be one of the most important days that we celebrate. Personally, I cannot think of a more rewarding or fulfilling job other than being a mother to my three children. I look around me at all the other mothers: my mother, my sister, and my friends that are mothers, and cannot help but think that these women are some of the most important people who have ever been put on this Earth.

Not only are we raising the future generation, we are putting out blood, sweat, tears, and mental health into raising children that will lead us. These children will grow to become doctors, lawyers, engineers, and environmental activists. That in itself is a daunting and large task that every mother has accepted with their entire being.

My husband once told me that he thought every day should be Mother’s Day. In my nonchalant manner, as usual, I waved him off and said, “Well, then every day should be Father’s Day.” That particular day had been tough. We had to juggle parent-teacher conferences for our oldest daughter, drop our twins at their Discovery classes, plus it was the beginning of softball season for my husband, and I had projects that I was trying to finish before the next string of ridiculously busy days. But, Jace sat beside me on the bed, and he closed my laptop. What he said next touched me, and I think that it should be shared to every mother. “Breanne, today was crazy.

You worked all day, managed to work-out somehow, drop Christine off at school, and direct me to drop off Callen, pick up Charlotte, and then dropped them off to Morgan (my best friend), so you could come watch my first softball game. It’s the little things you do… well, big things you do. Because you know I could not have made that happen within twelve hours.” It was then that it was put into perspective for me that it was just second nature to me to juggle these activities, make dinner, pick up and drop off my children, and meet my deadlines.

But, ladies, that is motherhood. Sometimes, we think that our hard work is unnoticed by our family’s. That is why Jace was adamant in his statement that every single day should be Mother’s Day. Mothers have it hard… and not any one of us have it easy.

After the birth of my oldest daughter, and my twins, I went through a large bout of postpartum depression. After that, I felt as though I was constantly being judged by other mothers and my family members on my parenting skills. But, the contribution that I was able to give to my children was more than enough to make these thoughts and feelings look minuscule in the greater scheme of things. When a mother gives up everything for her children, she does not think twice about it. For that is her job. That is my job.

My job is solely to take care of my children and raise them to be the best people that they can be, instill important and significant values, and to show them unconditional love. Anything monetary comes second.

I also believe that husbands’ or significant others’ play a vital role in how Mother’s Day is perceived. I know that a lot of mothers are not wished a Happy Mothers’ Day from their children, their family, their friends… And I was right there with you.

One of the most haunting things to me was when my ex-husband wished his fiancé a Happy Mother’s Day and got her flowers, but did not say anything to me because “I was no longer part of the family.” Honey, I get it. Even though that memory stays locked away deep inside of me, it still hurts. As mothers, we know exactly what we are doing, and how much we are giving to our children.

But, it is not about the flowers… the gifts… the “Happy Mother’s Day!” It is about knowing that we are appreciated. Let’s face it: we have one of the hardest jobs on this planet, and we deserve recognition for it. Where is the real sentiment behind these gifts? It comes from within, from the people who notice you busting your ass. Because believe me, honey… I know you do.

I think one of the main problems that society has faced regarding Mother’s Day is making it a tribute to not just mothers, but all women. We do not make Father’s Day to tribute all men; just dad’s. But, Mother’s Day is SO important because it is about our moms… not just the mom’s who gave birth to us, but the mom’s who raised us, nurtured us, and loved us. It is also a day to show appreciation to the mother’s of children as well. Honestly, the job of being a mother is not thankless. But, my husband seems to think so.

I cannot tell you how many times I have heard him asking our children: “Well, your mother did not say you could do that…”, “Where was your mother when you did this?!”, or “Just wait until your mother hears about this.”

In our very nature, we are self-sacrificing. When my children are having a tough day, they run to me and tell me all about it. I wipe away their tears, I listen, and I make them feel heard. After we talk through it, they act as though it never happened. The same thing goes for my mother. When I am having a bad day, I call her and do the same.

We never stop giving. It is not in our nature. So, this year on Mother’s Day, take the time to wish the important mother’s in your life a Happy Mother’s Day. In the end, words do not matter… but we could always use a little acknowledgment and love in our efforts to raise the next generation.

I have traveled the world and really love discovering new places and cultures. I love unique styles and opera music. I believe in being kind to self by taking the time to be well-groomed and look good. I try to eat and live healthily and have founded HAYA health for life, a premium food supplement company designed to enhance and maintain health.

10 tips on raising your teenager right