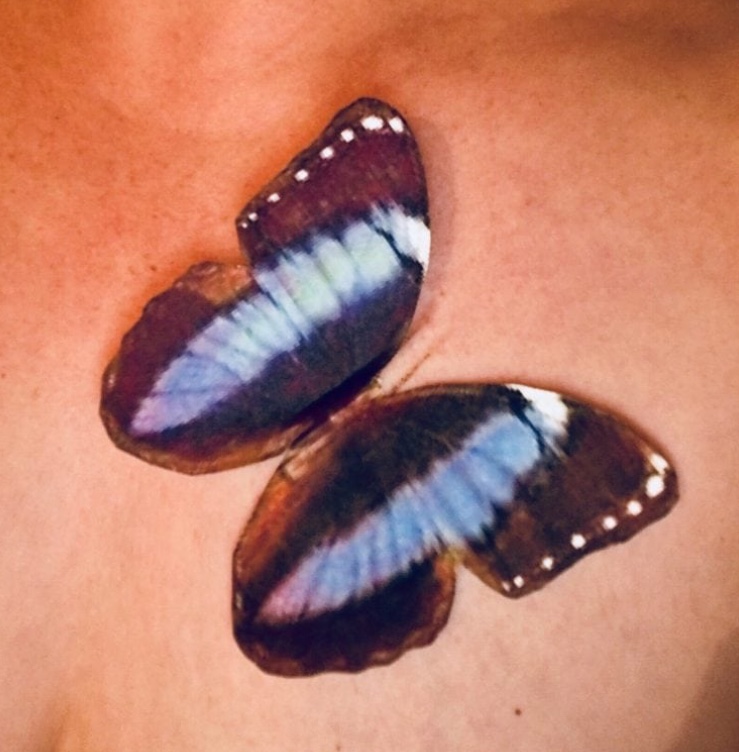 by Professor Kyla Gutsche
in From Caterpillar to Butterflies, La Femme

From Caterpillars to Butterflies: Canvases of Hope

For those of us who’ve travelled the odyssey of disease or trauma,

tattoos can be celebrated as marks of recovery, or, as I like to call them, as canvases of hope.

In this photo, I disguised a cancer patient’s port scar with a magnificent butterfly, signifying transformation and as a talisman for good health.  But scars can also be disguised with camouflage tattooing, where skin tones are implanted into the scar, to help it seemingly disappear and blend with the surrounding skin

Tattooing is the art and science of placing particles of pigment into the skin in such a way that the colours will not wear or wash off, and so that they last for years to come.

While traditionally thought of as the mark of criminals and soldiers, tattooing has a complex and varied history ranging from being found on Neanderthal corpses; to being found along the meridian lines of the 5,300 year old alpine mummy called Ötzi (presumably to ease arthritic pain https://www.discovermagazine.com/planet-earth/scientists-have-mapped-all-of-otzi-the-icemans-61-tattoos);  to ancient Egyptian priestesses and pregnant women—who not only had protective deities such as Hathor and Ta-weret tattooed on their thighs to ensure a safe delivery, but also standard sized triangles on their abdomens so that the priests could gage (by how far the triangles were distended by the stretched skin), how far along the pregnancy was, as well as the position of the baby! https://www.ancient.eu/article/1000/tattoos-in-ancient-egypt/

While the April issue of WomenSphere will feature my life and how I was motivated to change my career from that of a chemist and medical illustrator to become a tattoo artist, this column entitled From Caterpillers to Butterflies, will highlight the tenacious and courageous stories of the survivors and thrivers that I have the privilege of working with everyday.

In the Reconstructive and Plastic Surgery industries, tattoos (sometimes called Micropigmentation) are one of the most popular non-surgical choices,

which are often paired with surgical options like mound and nipple reconstructions for breast cancer survivors, as well as scar camouflage tattooing services for burn and trauma victims, as well as skin coloured tattooing for those suffering from vitiligo.  While many people are starting to embrace their deformities and scars, as well as their dermatological conditions, studies show that many more of us struggle with the stigma and the bullying that often accompany any type of difference. Restorative tattooing can help people reframe their experiences and regain control over their bodies.

Tattooing can not only break up a scar, or a tougher area of skin, to make it more malleable and pliable, it can also colour it to better match the surrounding skin.  In the case below, I even simulated little veins and freckles to better help the skin graft merge with the rest of the client’s leg.

This client, named Diane, refused to wear shorts or skirts where her graft would be seen until after the tattooing procedure.  In her own words:

“I’m normally a strong person and even before the graft was done to remove the cancerous tumour—I’d always prided myself about my lovely legs.  But once I had the surgery, I was constantly reminded of it by the graft, and people would comment on it, which made me feel self-conscious and feel very down about myself.  Now, the tattooing has put it out of sight and out of mind, and I can focus my energies to more important things like volunteering and providing covid-relief for the homeless.”

As Diane puts it, sometimes we need to invest in ourselves and help ourselves first, before helping others.  It’s kind of like what the airlines told us (when we could still fly!): “You must first apply the oxygen mask to yourself, before helping those around you, because you’ll be of no use to others if you’re passed out on the ground!”

Join me next week for different approaches of overcoming the stigma of the dermatological condition known as vitiligo.

The best window blinds in the world