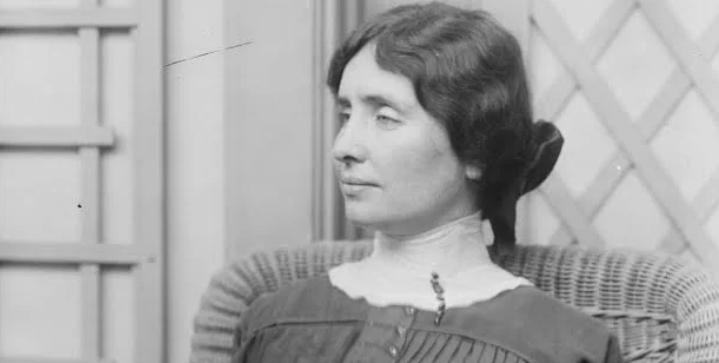 by Professor Kyla Gutsche
in From Caterpillar to Butterflies, La Femme

The remarkable Helen Keller was blind, deaf, and barely able to communicate since infancy, yet she graduated college at a time when many sighted and able-bodied women were unable to do so, and went on to become a renowned author, inspiring speaker, and unrelenting activist for social change.

Helen Keller was born in 1880, and was rendered deaf and blind after contracting a high fever when she was a toddler.  Her family exhausted nearly every available resource available to them—from private tutors to entering her into a school for the blind in Boston. When she was around seven years old, an extremely patient and empathetic teacher called Annie Sullivan, taught Helen braille, lip-reading, finger spelling and eventually how to speak by identifying the various sound vibrations of the throat. The Oscar-winning movie The Miracle Worker (see link below), depicts these milestones in a moving way that will inspire even the most hardened heart.

Motivated to learn, Helen continued fighting against injustice — she said not only for her own sake, but for others as well. She became involved in defending various civil rights, including the legitimate rights of women and the most disadvantaged.  Tirelessly touring  countless cities across the globe, she raised awareness that those with disabilities can aspire and accomplish great things, while simultaneously raising funds for various institutions committed to helping people with sensory impairments and limitations.

Due to her tenacity and ability to self-promote, Keller became an icon known the world over for triumphing over tremendous adversity.

Her shining example has often been a beacon for me whenever I feel overwhelmed in the darkness.  I think many of us can feel bogged down by our duties, our commitments, and our penchant for taking on other people’s problems as our own.  We need to firstly realize that we are strong and can overcome and do anything we put our mind to, and we need also to section out problems that are not ours to tackle, and return ownership of those problems to the people to which they belong. That way, we’ll have the strength to tackle the issues that matter most to us.

The next time you feel that familiar feeling of self pity percolating to the surface, remember the above quote from a person who could not see, hear or communicate until she was nearly a teenager.  She didn’t give up, or let obstacles hinder her pathway to success—in fact, she went on to do great things, and so can you!