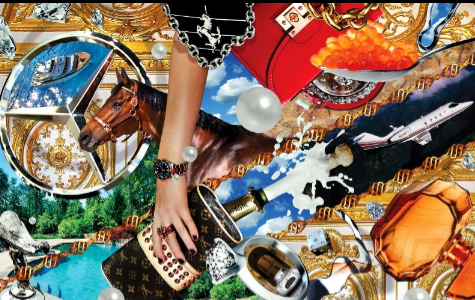 by Uju Ukpeh
in Business

Fashion trends. One look at a particular fashion and the right eyes could easily determine the decade in which it thrived. Leather jackets, white t-shirts, denim jeans, and boots – you’re likely seeing a greaser from the 1950s era. Bright colored clothes, towering hair with a ton of product and you have the 80’s. But what defines the trend within the decade? What traits or features go into making a trend? Pop-culture is one, what celebrities and star athletes wear and endorse could cause a trend. Maybe it’s something from a popular show or movie? Another key factor that can cause the creation of a fashion trend is economics and that’s what I’m going to touch a bit more on in this article.

Today, if you want a true taste of the top trending fashions, try walking through the halls of a High School. In High School, everyone has a clear variation of style, whether it be inspired by runway trends or brought up from the style of the streets. Since cities and towns are made up of different cultures, it makes schools a cultural fashion melting pot. While some styles can be spread out amongst different groups of friends, marginalized styles are only worn by specific people. It’s uncertain if the style of students is influenced or limited by their own social and economic status. Over the years there has been an increase in designer brands and different styles throughout the student body. Another thing that has happened over the past few years is there is a lot of influence coming out of the UK, London in particular, as well as from all around the world through social media. There has been a greater division between what people wear now, versus in eighth-grade people wore similar things. Now it seems like what people are wearing is being divided into groups.

Although various styles between friend groups and the mode that people adapt to are regulated by the fashion sense of their group. Another thing that you need to consider is that a lot of groups have some sort of stigma based on where you’re from as well as your family’s socioeconomic standing. It’s quite possible that is how some people become pressured into wearing certain clothes based on who they are friends with.

Because of all these factors, the overall influence of friends has a massive impact on the personal style and choice of clothing that an individual wears, thus making it much more difficult for students to express their own unique style. It’s very possible that people may feel scared to step away from the style that is popular with or worn by their group, and actually wear whatever it is that they want to wear.

The Cold-Hard Facts About Economic Impact on the Fashion Industry

Fashion is a very lucrative, $2.5 trillion globally recognized industry. In the US alone consumers dropped nearly $380 billion on brand name clothing and footwear in 2017. The fashion industry covers everything from textile and wholesalers to apparel brands, importers, and retailers create more jobs and employ nearly 2 million people in just the US alone.

Since its inception, the U.S. fashion industry has grown into a billion-dollar industry, long from its roots in manufacturing, ushering the industry into the high-value design that it’s known for today and also establishing some new and creative jobs. As with many of the industries that dwell within the manufacturing sector, the US now concentrates more on the high-value parts of the clothing and apparel global supply chain: research and development (R&D), design, and marketing.

The dual entities of globalization and technology have caused gigantic ripple effects in the fashion industry, just as they have done to many other industries before it. This has good and bad effects for both the company and the consumer. For instance, these ripples have created new trends, opportunities, and challenges. Social media is a huge game change and nowadays the most effective way of reaching teens and younger adults. Changing demographics, new business models, and advanced manufacturing are plowing the way to making more significant changes across all ranges of the fashion industry with the potential to reimagine it for years and years to come.

Closing Thoughts on Fashion and Economics

The theory of “newness” in fashion doesn’t necessarily reference the premiere of a trend, but instead the revival of a past trend. The exact reason that fashion cycles in this manner is a bit of a mystery, but there are some pretty solid theories out there if you’re willing to do a little digging of your own and build your own opinions on the matter. Considering that there are a plethora of different factors at play such as politics, cultural trends, and athlete or celebrity influence.

Ultimately, I would suggest research, research, and a little bit more research. As we usher in a new year and put the lackluster and highly controversial 2020 behind us, I encourage people to invest in brands and fashion that you support. Organic companies, companies invested in bettering the environment or giving back to the community would be a smarter play than investing your cash overseas or in large companies that could lose a million dollars and not even notice.

As we wrap up this article and you consider all the things that go into impacting fashion all over the globe, one true and constant factor is, of course, the state of the global economy. And when you stop to think about it, it makes a lot of sense. When funds are running low and a little tighter than usual, fashion is one of the first stops a consumer will make when it comes to saving money. Frugality becomes increasingly important and trendiness takes a backseat. Let’s face it, if you’re an adult and never bought clothes from a thrift store, yard sale, 2nd hand shop, or some other type of used apparel, you are either very picky or extremely rich. Where I grew up, most moms did their school shopping at the local Salvation Army. Why spend 50$ on jeans and sneakers if your kids are just gonna grow out of them and play hard in them anyway?

I have traveled the world and really love discovering new places and cultures. I love unique styles and opera music. I believe in being kind to self by taking the time to be well-groomed and look good. I try to eat and live healthily and have founded HAYA health for life, a premium food supplement company designed to enhance and maintain health.

Even though everyone agrees that one of the greatest feelings in the world is seeing dollar signs in your bank...

Video credit for the Oprah Video: CBS What are your thoughts about alleged racial discrimination in the British Royal Family?...

The Pandemic Stockpiling: Was It Really About the Toilet Paper?

When COVID-19 first emerged in the early parts of 2020, the already hard to predict consumer behaviour took an even...

Being Financially Independent in 2021

Would Donald Trump Be Back?

Photo Credit: Associated Press Having served as the  45th President of the United States of America. Donald Trump lost the...

African Americans had to ensure incredible hardships to find themselves equal to the white European immigrants that started to build...

Are your cosmetics eco-friendly?

Benefits of Yoga On Mental Health