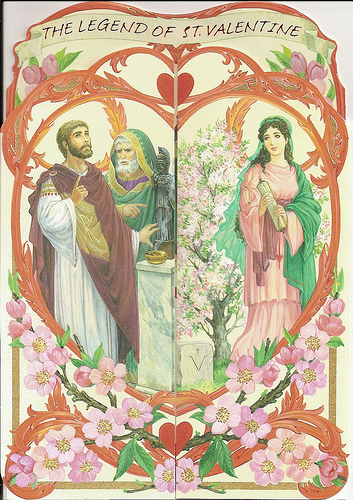 by Professor Kyla Gutsche
in From Caterpillar to Butterflies

In many countries, what originated as a Western Christian feast day on February 14th, has become a celebration of romance and love.

There are various traditions as well as Saint Valentines but the one I was taught dates to a certain 3rd century Roman martyr who restored sight to the blind daughter of his jailer, thereby inspiring the jailer and his household to convert to Christianity.  Later, other traditions connected this to the theme of love—one particular embellishment claims that this Saint Valentine fell in love with the jailer’s daughter and before his execution he wrote her a farewell love letter signed “Your Valentine”, and sent it to her along with a little croqus flower.  Supposedly the note miraculously healed the girl from her blindness, and the sweet flower was the first thing she saw.  This, in turn, inspired the customs of sending greeting cards, known as ‘Valentines’ as well as presenting flowers and candy to one’s beloved.

When learning about all of this in Catholic school, I vividly remember wondering about the jailer’s daughter whose sight was restored.  She seemed to get short shrift in all of this and it inspired me to research more about her.  We celebrate the saint but why not the woman that inspired the first ‘Valentine’?

According to Rosemary Guiley, in her Encyclopedia of Saints, the jailer’s daughter was named Julia, a pretty young woman with a mind eager to learn.  Before his execution, Saint Valentine read stories to her and told her about God.  He inspired her with his moral fortitude and galvanized her with his courage in defying the Emperor’s unfair edict.

During Valentine’s time in jail, the emperor offered him one last chance to renounce his Christian faith and to retract his defiance of the emperor’s monopoly on power.  Valentine refused to bow to the emperor and was clubbed, stoned, and ultimately beheaded.   Julia also in some versions of the legend was put to death for defying the emperor and holding steadfast to her Christian beliefs.

So as you’re opening up your Valentine’s Day cards this February, be sure to thank St. Valentine—and also thank Julia—for not only their courageous stand for love but for their steadfast commitment to their principles!

“Self Pity is Our Worst Enemy” - Helen Keller(1880-1968) Photo Credit: Helen Keller from the Library of Congress, Public Domain The...

The year 2020, quite apart from becoming synonymous with COVID-19, will forever be linked with the increasing reckoning over racial injustice sparked...

From Caterpillars to Butterflies: Canvases of Hope For those of us who’ve travelled the odyssey of disease or trauma, tattoos...

Before After Photo credit Cosmetic Transformations This is Emily. After a dog attack, she avoided leaving her house and interacting...

Sphere Woman of The Month